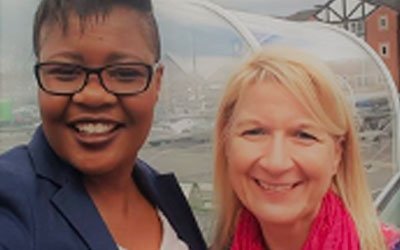 Emma Guy Gets The Job Done.

As I walked up to Emma ‘The Warrior’ Guy, she turned to me with an engaging smile. She has the quiet confidence of one who is used to getting the job done. I had met this lady briefly at a fundraising event, but I really did not know much about her. I had spent the previous night trying to get as much information as I could but nothing I thought I knew about this woman would have prepared me for this amazing lady.

Emma’s story is a powerful one and I feel totally inadequate sitting here trying to put it on paper.

Unlike most of us who deal with cancer from a distance until it touches us, Emma knew a lot about cancer long before her diagnosis. You see, Emma is a qualified Acupuncturist and as well as running a successful acupuncture clinic in Northwich with her team she had worked for St Luke’s Hospice on a part-time basis for almost 6 years prior to her diagnosis. She had seen all kinds of cancer cases, and she had helped a lot of people deal with this horrible disease.

So when Emma found a lump on the morning of 31 January 2016 she instinctively knew what it was. Everyone reacts differently to finding a lump, and I am sure most of us hold on to the hope that it would turn out to be nothing, but Emma is no ordinary lady. And so her reaction was a little removed from the ordinary. Instead of losing her head and going into panic mode, she sat down and drew a mind-map. The mind-map put the lump at the centre, and she outlined all the possible scenarios. This, she said, was done to try and make her husband understand what they were dealing with. This included facing up to the fact that she could lose her life.

I remember her sitting there telling me as calmly as anything, that she woke up at 3:00am on the day she was going to get the results of her biopsy and planned every detail of her funeral. She and her husband were upset and crying as she went through the details with him. But what this did for both of them was to cauterize the fear fountain and allowed them to deal with the business at hand. When they got to the hospital and were given the news that Emma had cancer, the mind mapping and Emma’s background allowed them to look at the treatment plan objectively. So when the oncology team suggested that Emma have a lumpectomy, she immediately told them that she preferred to have a mastectomy. They tried to tell her that the size of the lump and the fact that there was no cancer detected in her lymph nodes meant that a lumpectomy would suffice, but she was adamant. She opted to be referred to Wythenshawe Hospital where she could have the mastectomy and reconstruction at the same time.

After the treatment plan was sorted, Emma had to do the hardest thing of all. Telling her then 10-year-old son that she had cancer. Nothing in life ever prepares any parent for something like that. Emma decided to be as honest as possible and include her son throughout her treatment. When she had her operation she gave her son jobs to help out around the house. This was a way of making her son feel like he was playing a part in mummy’s treatment, but also when she was well enough to take some of those chores back, it made her son realise that she was getting better.

As soon as Emma was able, she decided to go back to work. At this point, I had to interrupt because I could not believe my ears! Emma just smiled and said, ‘I had to go back, I love what I do’. For her, it is as simple as that. This does not mean going back to work was easy for her. Her first clinic back at the Hospice was treating a terminal breast cancer patient. That night she went home and cried. When her husband asked if it was wise to continue, she said she could, and she did.

Here are a few more facts about Emma ‘The Warrior’ Guy: